Iron can be one of the most exasperating elements found in water. Even trace amounts of it, as low as .3 ppm (parts per million) will cause staining on fixtures, in sinks, showers and even toilets. It ruins the taste of food and drinks, causes blockages in pipes, and corrodes plumbing.

When it comes to iron removal, water softeners are effective when iron concentrations are low and all or most is in a soluble state. For relatively high levels of inorganic iron, an iron filter may be a necessary supplement to your home’s water softener.

Your typical water softener contains resin beads that remove the hardness minerals, calcium and magnesium, through the process of ion exchange. While ion exchange is successful in dealing with both hard minerals andiron, with a greater than normal iron concentration, as well as some stubborn forms of iron, a water softener alone may not be the answer.

Removing high levels of iron can also take a toll on your water softening system, causing frequent regeneration, leading to a shortened resin life. Over time, iron will lessen the ability of the water softener to remove minerals from the water, and often, excess iron will remain in the supply. That’s when you may need to consider updating your water treatment equipment to include  iron filtration.

There are two types of iron commonly found in water, insoluble ferric, or “red water” iron, and soluble ferrous, or “clear water” iron. Water containing ferrous iron is clear because the iron is completely dissolved, but when exposed to the air, it turns to a reddish-brown color. This rusty water forms sediment, which is the oxidized, ferric form of iron that won’t dissolve in water. This type of iron leaves deposits that often break loose from water piping, causing rusty water to flow through your faucets.

A less common form of iron is iron bacteria, small living organisms that naturally occur in soil, shallow groundwater, and surface waters. This type of bacteria combines iron and oxygen, which forms swampy rust deposits and a slimy orange-brown substance that sticks to wells, pipes, sump pumps, and plumbing. Iron bacteria is particularly nasty, as it continues to build up and can completely clog pipes within weeks, spelling disaster for homeowners. This type of iron is extremely difficult to get rid of and can also create conditions where disease-carrying organisms may grow.

Eliminating iron bacteria is challenging and expensive. It needs to be physically removed, followed by scrubbing of equipment. Most commonly, the next step is chemical treatment with bleach, detergents or acid that dissolves deposits and kills the bacteria. Shock chlorination is also used in the treatment of iron bacteria, but the effectiveness of this treatment is dependent on how carefully measured the concentration is. Unfortunately, there’s no guarantee that iron bacteria won’t present itself again, making frequent testing of your water a necessity.

Why Do I Need an Iron Filter?

A common question is why a home would need an iron filter if a water softener can treat iron. What's the difference between water softeners and iron filtration systems? Traditional ion-exchange water softeners that work with salt regeneration can remove ferrous iron in the same way they treat water hardness. Ion exchange can remove ferrous iron, in water with low pH levels and very little oxygen. This combination assures that the iron will not oxidize to ferric iron while attached to the media.

If your water reaches the water softener without being exposed to air, this method is effective. Once the water is exposed to air, the ferrous iron changes to ferric iron, and once the iron attaches to the media, it’s difficult to remove during regeneration. The sticky substance that adheres to the beads in a softener bed may not be eliminated, even with a thorough backwash, and will gradually accumulate. In time, bits of iron may appear in your softened water immediately after regeneration or after an increase in water flow through the softener, eventually reducing the hardness removal capacity.

Ideally, ferrous iron removed by ion exchange should be discharged along with hard minerals during brine regeneration. However, it’s nearly impossible to remove ferrous iron without some of it being converted to the ferric, insoluble state by oxygen in the water or brine. For this reason, a water softener alone is not always the perfect solution for iron removal.

An iron filter should be used when water contains a high concentration of inorganic iron, whether ferrous or ferric, or when organic matter is also present. Most iron filters are similar in appearance and size of a standard water softener, but contain media beds that will oxidize the soluble, ferrous state of iron to an insoluble, ferric state so that the solid particles can be filtered from the water.

Common methods of iron filtration use ca`talytic carbon filters combined with hydrogen peroxide, oxidation and Katalox Light filters. Water supplies with a high iron content can be treated with oxygenation, which introduces oxygen into the water, with oxygen containing chemicals like chlorine, or by aeration. Then, the water is filtered before it enters the water softener. This method avoids fouling the softener bed, but oxygenation will not eliminate iron bacteria or iron that has reacted with organic material. A specialized filter using oxidation and filtration is best suited for ferrous iron in concentrations between 7 to 15 ppm.

AIO filtration uses a natural process of oxidation to remove sulfur and oxidized iron from water. Natural air oxidizes the iron by maintaining an air pocket of oxygen in the top of its tank. This adds the oxidation abilities needed for proper precipitation of dissolved impurities for removal.

If you don’t have an existing water softener and you want softened water and iron removal, an all-in-one system like the  Genesis Iron Pro Max uses special resin to prevent the iron from deeply imbedding within the resin bed, allowing the iron to be easily removed and flushed down the drain. 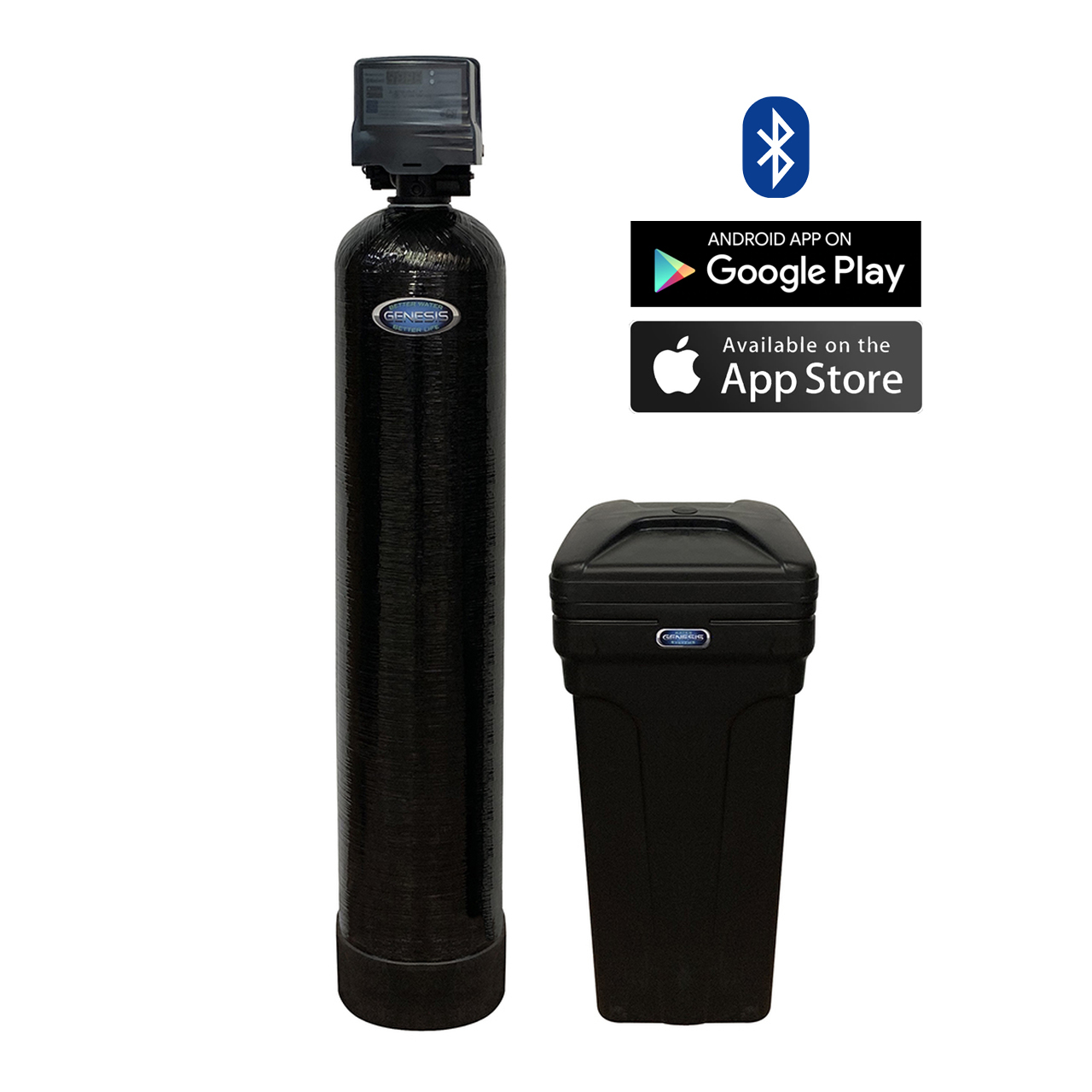 The Best Water For Your Home

Iron removal is an important phase of water treatment in the U.S. It’s not uncommon for a home’s water to have iron levels upwards of 10ppm, particularly in central states, where soil contains a lot of natural iron seeping into the aquafer or water tables. More water softeners are used to remove iron from household water supplies than any other devices or systems, and many of these installations are successful and consistently remove both hardness and iron.

Many factors affect the ability of softeners to remove iron successfully; the form of iron and its concentration, the presence or absence of organic matter and dissolved oxygen, regeneration frequency, and pH levels. A filter designed to specifically treat iron will allow your water softening system to do what it does best—provide your home with continuously softened water. A water softener does an important job in making water right for your family, but it may not be the only equipment your home needs.