Well water, unlike municipally supplied water, is untreated and unregulated. Therefore, homeowners are tasked with testing and treating private well water. Water pumped direct from a well will have some of the properties of the ground area it is drawn from. These elements include but are not limited to iron, manganese, hardness and hydrogen sulfide. 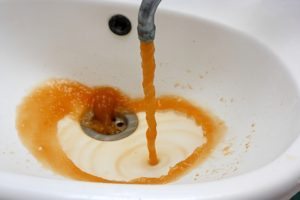 How to Test Water for Iron

Iron is the fourth most common element found in the Earth's crust. The prevalence of iron in the ground is why it is so often found in well water. Iron and other contaminants can be detected by using  water test kits, which are designed to detect specific elements found in well water. These may be present in various concentration levels, which can only be accurately identified through water testing.

Determining what is in the water is the first step in treating and providing safe clean water. A  chemical-free iron filter such as a Katalox system removes iron, manganese and hydrogen sulfide safely and effectively. Iron filters are designed to remove these contaminants from the water and flush them away.

When ferric or ferrous iron is present in water the effects can be seen, smelled, tasted and felt. Iron in water stains laundry, drinkware, dishes, toilets, tubs, sinks, and fixtures by leaving yellow, red, and brown spots. Water, beverages, and food acquire a metallic taste or smell, which ruins the experience. The effects of iron in water can be felt through repair and replacement costs of pumps, pipes, appliances, fixtures, and sprinklers.

Water with an orange-brown coloration has Ferric iron present in the water. This is undissolved and present as a solid in the water. Ferrous iron is dissolved in the water and cannot be seen until it is oxidized. Both types require testing to determine the concentration which is measured in parts per million (ppm). Iron in water over 3 to 4 ppm will need an iron removal system, in addition to a  water softener, to mitigate the problem.

Water with high levels of manganese may also stain fabrics and fixtures. Staining from manganese is commonly black in appearance. High concentrations of manganese ingested over the long term have been shown to cause toxicity to nervous systems in humans. 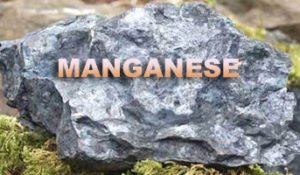 Pregnant women, children, and the elderly are most at risk for high intake of manganese. An iron filter will remove manganese by oxidizing the elements.

The presence of Hydrogen Sulfide in water is not detectable by sight but is identified by its unique and pungent odor. The rotten egg smell of hydrogen sulfide is easily recognizable and universally disliked. Hydrogen sulfide in well water will be present in both the hot and cold water. A presence in the hot water only indicates a byproduct of sulfates in the water, which are reacting with the magnesium rod in the water heater.

Iron filters for well water remove the hydrogen sulfide through the oxidation process. For sulfates causing hydrogen sulfide the problem can be addressed by replacing the magnesium anode rod, or a water heater already equipped, and with an aluminum or zinc anode rod. In extreme cases a sulfate ion exchanging removing system may be required. 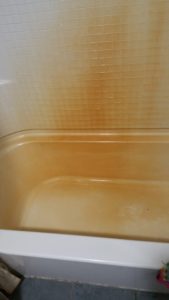 Iron filters are able to remove manganese, hydrogen sulfide and both ferrous and ferric iron reliably and consistently. The staining that occurs from a higher concentration of iron happens through the oxidation process. When the water is able to slow down or to be in a state of rest the iron becomes oxidized. An iron removal system uses oxidation to remove iron, manganese and hydrogen sulfide and then flush away these contaminants.

How to Remove Iron from Well Water

The only safe and effective way to remove iron from the water is by utilizing an iron filter. A Katolox filtration system is able to remove both forms of iron, magnesium and hydrogen sulfide present in well water. A Katalox system treats the water through providing the correct amount of contact time required for oxidation to occur.

The system is designed to backwash every three days to flush away all removed contaminants. Flushing the removed solids ensures that any bacteria, which feeds on iron, isn’t able to survive or proliferate within the filter. Consistent backwashing is essential to allowing the system to provide safe clean water.

Based in the USA