Last One to The Filter Is a Rotten Egg!

A disagreeable pungent “rotten egg” smell caused by hydrogen sulfide gas can call into question the quality of a home’s water, making its consumption an unpleasant experience. 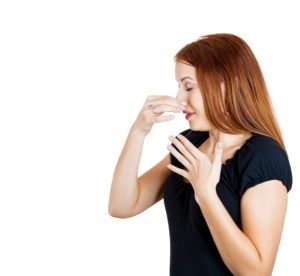 Hydrogen Sulfide gas is formed from decomposing deposits of organic matter (such as decaying plant material) and occurs naturally in groundwater. Bacteria chemically changes natural sulfates in water to hydrogen sulfide. It can then enter surface water through springs, plumbing systems, water heaters, and wells. Learn how to remove hydrogen sulfide from well water without chemicals.

Wells that have been drilled into bedrock containing shale, sandstone, coal deposits, or close to oilfields are more likely to house just the right conditions for anaerobic bacteria to produce hydrogen sulfide.

Hydrogen sulfide gas is more likely to build up in water that is stagnant for long periods of time; homes with water supplied by local municipalities are particularly susceptible, particularly in plumbing “dead ends” or “dead legs “where water is likely to pool.

In addition to the nasty taste and odor in a home’s water, hydrogen sulfide gas can cause other aggravations. The presence of iron and manganese in hydrogen sulfide can turn water black and greasy-feeling, making it difficult to launder clothing and wash dishes. It can also leave its mark on kitchen and bathroom appliances, tarnish silver, and discolor brass or copper utensils.

Hydrogen sulfide is extremely corrosive to metals; it will quickly destroy even stainless steel. Wells constructed with steel casing and houses plumbed with copper pipes will have a shortened lifetime.

Although not known to cause significant health risks, hydrogen sulfide gas is a nuisance that not only affects the taste and smell of water but if left untreated, can also blacken the appearance of it. 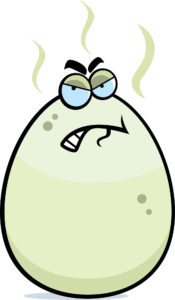 When sulfates in the water are at concentrations greater than 220 ppm, a laxative effect is produced and the risk of dehydration is increased in the sick, elderly, infants and young animals.

Iron Bacteria & Why Testing is Important

In some instances, that awful rotten egg smell in water is not caused by sulfates. While some anaerobic bacteria feed on sulfur, iron is broken down by others to survive. Chemical reactions produced by bacterial iron can trigger a repulsive taste and odor in the water that can be mistaken for hydrogen sulfide.

Iron bacteria are small living organisms that naturally occur in soil and water. These bacteria combine iron and manganese with oxygen to form rust deposits and a slimy buildup. Iron bacteria is a common problem but is often confused with a hydrogen sulfide gas issue. Improper treatment can make the problem worse; testing can ensure that the correct solution is found.

Even if that rotten egg smell is caused by bacterial iron, rather than sulfates, iron bacteria create an ideal environment for sulfur-feeding bacteria to grow and thrive, making the development of hydrogen sulfide gas much more likely to occur.

If iron bacteria are also present in the water, either with or without sulfates, a rusty, foul-smelling sludge is formed that ranges in color from red to brown, to yellow. Clothing, fixtures, and dishware that come into contact with this water can become permanently stained.

The color, taste, and appearance of food and drinks made with water that contains iron or iron bacteria are affected as well. Significant corrosion of metal utensils, fixtures, plumbing, and appliances is also caused by bacterial iron.

Iron is found in abundant concentrations in most soils throughout the earth. This makes it and the bacteria that feed upon it, common water contaminants. Thankfully, there are water treatment systems that eliminate rotten egg smells in water, whether caused by sulfates or iron bacteria.

Rarely, the vile stench is caused by sewage that has found its way into the water supply through the plumbing system. To determine the source, it’s important for the water to be tested for the presence of hydrogen sulfide, sulfur, coliform bacteria, bacterial iron, and other contaminants.

Water testing is a necessary step when a rotten egg smell is present. Although commonly created by sulfur bacteria, once concentration levels of the contaminants are identified through testing, it’s much easier to choose the best water treatment method to solve the problem.

Often, that rotten egg odor is only present when the hot water is running. That’s because there are sulfate-reducing anaerobic bacteria that react with the sulfur and hydrogen created by the action of the magnesium rod, or anode, in the hot water heater.

Replacing a Magnesium Rod with Aluminum

Magnesium produces a stronger current than aluminum and its corrosion properties are superior; it will protect a water heater tank much more effectively than an aluminum rod. Additionally, sulfur-loving bacteria will still interact with aluminum in water that has been softened. Aluminum rods collect a buildup of corrosive materials that harden and make testing for inspection or replacement a challenge. Hot water also has the potential to become contaminated with small traces of aluminum, making it a possible health hazard.

When homeowners pull the magnesium rod and replace it with aluminum it won’t remedy water quality issues caused by iron or bacterial iron. Even if the sulfur odor is eliminated temporarily. For this reason, Discount Water Softeners strongly suggests using iron filtration to safely remove both iron and hydrogen sulfide from the water.

Most water treatment systems implement a combination of disinfection, aeration, and filtration to remove sulfates and iron from the water. Many homeowners want better water quality without using harsh chemicals that are harmful to human health and the environment. Discount Water Softeners offers top-quality filtration systems to meet the specific needs of homeowners:

The Eliminator Chemical Free AIO (air injection) Iron and Hydrogen Sulfide Filtration System is an environmentally friendly water treatment. The buildup of gases is dissipated by the use of aeration in this system. Iron contaminants up to 10 ppm and hydrogen sulfide up to 5 ppm are removed by filtration in the unit.

The rotten egg scent from the water is eliminated by the unit without the use of strong chemicals. This system is easy to install and maintain as retention tanks and chemical injection pumps are not required.

Occasionally, the level of sulfur and iron-loving bacteria in the water must be reduced by disinfection in order to effectively remove the rotten egg smell. Shock chlorination is used in some wells to reduce the bacteria; other systems use whole house chlorination. In other water treatment systems, potassium permanganate is relied upon to reduce bacteria levels.

A third option for iron and sulfur removal is the Genesis Katalox Chemical Free High Flow Iron and Sulfur Backwashing Filter. In this chemical-free water filtration system, manganese up to 7 ppm will be removed, iron up to 10 ppm and hydrogen sulfide up to 5 ppm. Contaminants as small as 3 microns are filtered and ejected by the system through backwashing. The backwashing cycle increases water flow and prevents the buildup of iron and other contaminants in the media bed.

The Genesis systems can be fitted with an optional solution tank so that an oxidizer can be added to eliminate bacterial iron and keep the media bed disinfected. The oxidizer is removed from the system through the backwash cycle keeping out of the water supply. This option makes the Genesis a top choice for households with greater water usage or for homes that have high concentrations of iron, iron bacteria or organics.