Droughts occur during periods of reduced precipitation and increased temperatures. Areas of widespread drought in the United States have continued to increase in 2016. As droughts increase the need for more effective water conservation also increases.

Water supplies decrease during a drought due to evaporation and lack of precipitation that would normally replenish groundwater levels. Droughts also affect the quality of the water that remains by increasing the concentration of hardness minerals such as calcium and magnesium in the groundwater, leading to an increased need for homeowners to use water softeners to improve water quality. 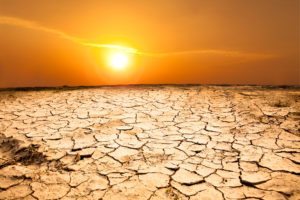 In the past, the arrival of fall and winter has ushered in cooler temperatures and increased amounts of rainfall and snow. These seasonal changes would lessen the strength of past droughts by supplying some relief. As 2016 comes to a close little relief appears to be in sight for those that have been affected by the droughts.

Nearly 129 million people are known to have been affected by drought in the U.S., according to data reported by the National Integrated Drought Information System (NIDIS). Drought conditions are also expected to persist at least through the end of January according to outlooks that have been reported by The National Weather Service's Climate Prediction Service.

California and Texas Have Been Hit Hard by 2016 Drought

California and Texas are the two states that produce most of the food consumed in the United States, so there is a greater demand for high-quality water for personal use and agricultural needs, in addition to industrial purposes. Without the widespread deployment of more efficient and effective methods of water conservation, continued drought in these areas can be expected to lead to an increased risk of shortages of water, higher food prices, and the increased risk of food scarcity.

While the negative and damaging effects of the drought have been obvious in California and Texas, the drought has affected many other areas. Western states that have been affected by drought in 2016 include Arizona, Nevada, Utah, New Mexico, Colorado, Oklahoma, and Kansas.

Areas of the northeast and the south that usually experience higher levels of precipitation throughout the year have also struggled to cope with drought conditions in 2016. Drought conditions that have been severe enough to affect the water supply have also occurred in parts of over 16 additional states: New York, New Jersey, Massachusetts, Vermont, New Hampshire, Maine, Connecticut, Tennessee, North and South Carolina, Georgia, Alabama, Mississippi, Arkansas, Missouri, and Louisiana.

While California and Texas are the nation's top food producers, the additional states affected by the drought make significant contributions to the nation's food supply. In the past, more attention has been focused on conservation in western states that experience drier weather patterns. As drought conditions have spread throughout the U.S., individuals and organizations must work together and learn to be focused on improving water conservation efforts nationwide.

Homeowners can take a number of actions to conserve water. Examples of easy steps to reduce water usage in the home are to replace leaky plumbing fixtures and spend less time in the shower. Another strategy to conserve water is to swap out the existing landscaping for plants that are more heat tolerant and require less water.

One of the biggest impacts in reducing water usage in the home is to replace older, less efficient appliances. When updating appliances, many homeowners purchase dishwasher and washing machine models that use far less water and energy. These are effective ways to conserve water and energy and reduce utility expenses in the home.

Another appliance that is commonly overlooked is replacing the water softener. Water softener technology has also improved, and the newer upflow systems conserve water at up to 64% over downflow systems.

Not All Water Softeners Are Equal - Downflow vs. Upflow Brining Regeneration

According to data that has been reported by the USGS, hardness minerals that affect water quality have occurred throughout most of the United States. Hard water affects everything from the ability to wash and clean one's clothes to being blamed for dry skin, rashes, and even costly plumbing repairs, so many homeowners chose to soften their water.

Over the years, many improvements have been made in the field of water softening technology. Softeners are now more efficient and have been of benefit to homeowners that have struggled to conserve water.

The most efficient ion exchange softeners on the market today use dramatically less salt and water than some water softeners that are still being produced. Water consumption has been reduced in these newer softeners by using upflow brining regeneration.

In water softeners, hardness minerals are removed from water by using ion exchange to "swap" ions with the hard minerals and exchange them with soft ones that reside on the surface of the resin as water flows through the resin bed. Once all of the exchanges have been made, the ion charges stored on the resin must be regenerated, or swapped, with fresh soft ions contained in salty brine. This recharging solution has been made with either sodium chloride or potassium chloride that has been dissolved in water.

Understanding the Meaning of Downflow

Downflow technology is used in most water softeners, including the once popular Fleck line, to regenerate the resin bed. With this method, the brine flows into the resin tank from top to bottom, in the same direction that water from the service main flows into the unit to be softened.

This means that the freshest brine has been applied to the portion of the resin that has been the most depleted. This action is inefficient and increases hardness leakage, as the hardness minerals are pushed further down the resin, requiring more salt and more water to regenerate.

Understanding the Meaning of Upflow

Upflow technology has been used in newer ion exchange systems, such as the Genesis line of softeners, and can reduce salt usage by up to 75% and water usage by 64% when compared to the downflow systems.

With upflow regeneration, the brine enters the resin tank from the bottom and rises to the top. 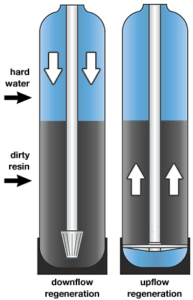 This action allows the portion of the resin that has been least depleted to be regenerated by the freshest brine.

Hardness leakage is decreased by this action and contact time with the resin is increased, which increases efficiency.

Upflow technology not only uses less water and salt by decreasing hardness leakage, but channeling is also decreased as the brine rises to exit from the top and "fluffs" up the resin, for more effective regeneration. This step also decreases the amount of salt that has been needed to soften the water.

Bridging is also less likely to occur in water softeners that employ upflow regeneration. In downflow regeneration the resin is more likely to clump together, which creates bridges or blockages that impede the service flow and decreases efficiency.

Finding ways to decrease the amount of water used in households is an important step in the effort to increase water conservation and counteract the effects of drought. Two of the most popular brands of water softeners that have been on the market for some time have been Fleck and Genesis. Since upflow technology is more efficient at brine regeneration, using less salt and water, Fleck has announced that it has discontinued the 5000 and 7000 series of softeners that used the downflow technology to soften water.

By upgrading to the Genesis line of softeners that employ upflow regeneration, households have been able to save hundreds of gallons of water and hundreds of pounds of salt each year!

Since less sodium is added to the water during the regeneration process, the Genesis system has not only used less water to regenerate, the water that has been discharged during regeneration has contained less saline. Salinity is important since the amount of salt that is concentrated in water not only affects taste; it inhibits the ability of plants to grow properly.

When water contains high levels of salt, it becomes unsuitable for agricultural use and thus compounds the effect of the drought on water supplies, which are already scarce. Drought conditions increase salinity in groundwater supplies. Choosing water softeners that use less water and salt, while also reducing the amount of saline in the water that is discharged during regeneration, is an important step forward in the battle to increase water conservation during droughts.